Insureon’s online platform offers immediate access to the best quotes from top-rated insurance companies, right after clients have filled out a simple application form. A typical Insureon customer can save up to 20% on their insurance.

Despite operating in a relatively small commercial niche, Insureon has been growing at a rate of 36% per year. The driver behind this impressive growth is the company’s commitment to technological modernization and implementation of innovations.

Our cooperation with Insureon began in 2012 when they decided to design a marketing and sales automation platform. The company’s in-house development team stretched thin between multiple other projects and lacked the capacity to accommodate their growing IT needs. So Insureon turned to Velvetech for assistance.

Having completed that initial project quickly and efficiently, Velvetech established a trusted partnership with Insureon that would last for years.

Soon after the initial project delivery, Insureon’s management decided to expand the business. The decision called for a complete overhaul of their legacy infrastructure.

During six years of collaboration with Insureon Velvetech has brought to life more than fifteen different projects, implementing the company’s boldest ideas.

The digital revolution that’s been taking place over the past several years has dramatically affected the insurance industry. Conservative insurance business models started failing to cope with the growing consumer demand for personalization, transparency, and delivery speed.

Insurance carriers have been slow to introduce innovative digital solutions to satisfy customers’ needs. They clutch on to their legacy systems.

That situation created an opportunity for forward-thinking companies like Insureon to become experts in Insurtech or, in other words, find application for the emerging technologies — IoT, wearables, AI, etc. — in the world of insurance. As a result, a new perspective on how to render insurance services came to life. 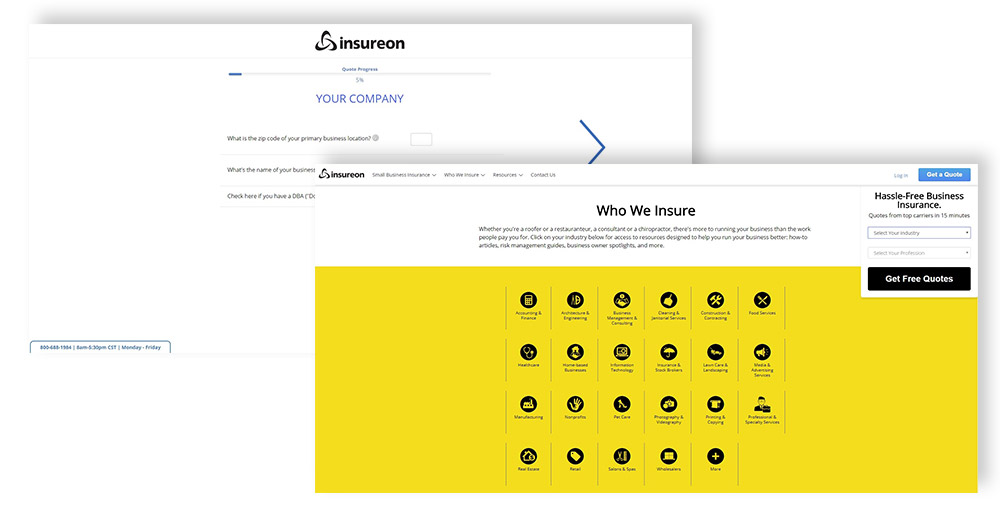 How We Did It

Insureon offered us an opportunity to work on various projects. Insureon is an innovative company always trying out new technologies, approaches, and ideas. Velvetech had to adjust to changing requirements and help Insureon grow further.

Since Insureon did not have all the capabilities internally, Velvetech’s task was to assemble qualified teams, innovative and ready to think outside the box. We managed to bring together highly-skilled resources very quickly to satisfy the client’s requests. It took only three weeks to ramp up a team of ten professionals to start working on the project.

On most projects, we worked in coordination with Insureon’s development team and relied on Scrum and Kanban methodologies.

As with all projects, our team of developers and business analysts spent the ramp-up time to understand Insureon’s business goals and the workflows in the client’s company. It was necessary to quickly create a product that could adapt to Insureon’s existing architecture built in-house.

Our team learned how to work with innovative technologies in the complicated system created by Insureon. Velvetech gained firsthand experience in such areas as modular systems, microservices, Docker, Elasticsearch and many others.

Velvetech employees often took the initiative when working on the assigned projects. A good example was the development of an online builder for creating application forms. The builder allowed Insureon’s employees to drag-and-drop elements to create an online application instead of tedious editing of XML files

Data protection has always been a priority for our company. In Insureon, they take it extremely seriously, which involves the development of proper programs. That is also the reason why the company does not use cloud solutions yet: they want to control data access to the system. 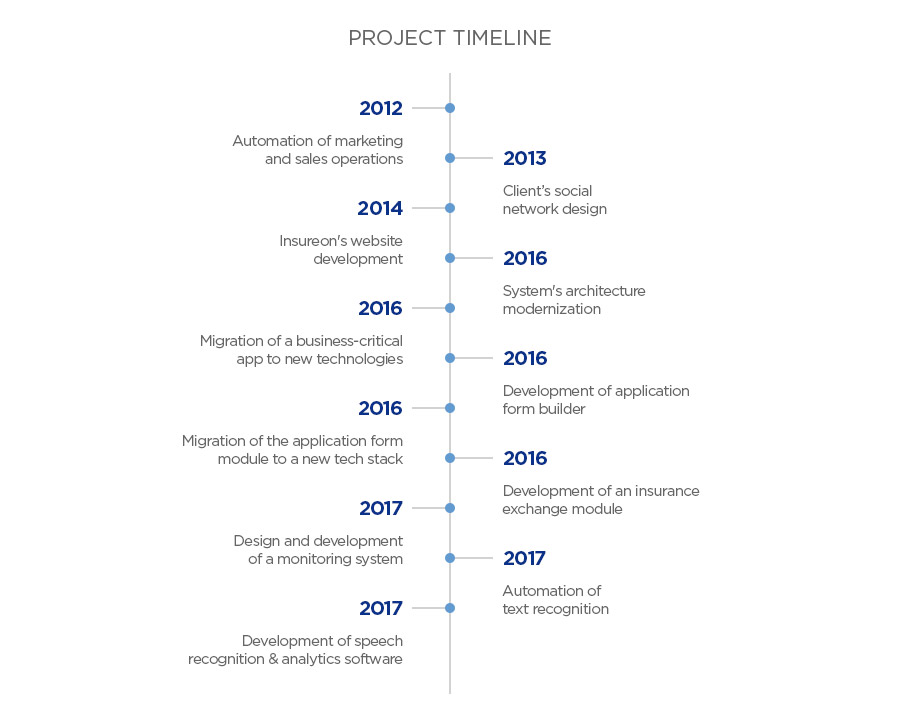 It turned out a challenging task to automate interaction with customers. Insureon offers their customers 100% tailored solutions that would match the client’s needs to the maximum. Therefore, the application form Veletech worked on had to cover all possible variants of insurance offers.

A regular application form features more than 100 fields. Information from each field influences the final offer to the applicant. The form’s logic is convoluted, and our team had to account for a lot of QA work to make sure the application forms builder worked flawlessly.

Another challenging automation task was email generation. One of the reasons was, again, the long application form with lots of conditions. We worked on the mailing system, which had to generate a lot of emails immediately after an applicant had submitted a form.

Insureon’s old system was a complex, monolithic solution, with its parts closely tied together. The system was lagging behind a modern technology trend — to rely on microservices-based architecture.

It was some other company who developed the system, and it had significantly grown by the time we started working on it. As a result, it took us about a year to migrate the old system to the new platform by replacing the monolithic architecture with independent microservices working in tandem.

The system migration also included replacing Windows applications, humongous systems themselves, and adjusting the new applications to the company’s needs. It was essential to sync and coordinate their work with the unique internal system.

On top of that, the new system required constant monitoring for errors. With the previous monolithic system, it was quite easy to detect failures: if a component did not work, the whole system was down. Once we split the system’s functionality into modules, it became vital to monitor each module.

Even though our company had some groundwork in the area of speech recognition, the project we delivered to Insureon was Velvetech’s first large-scale end-to-end project in the field of Speech Recognition and Analysis. 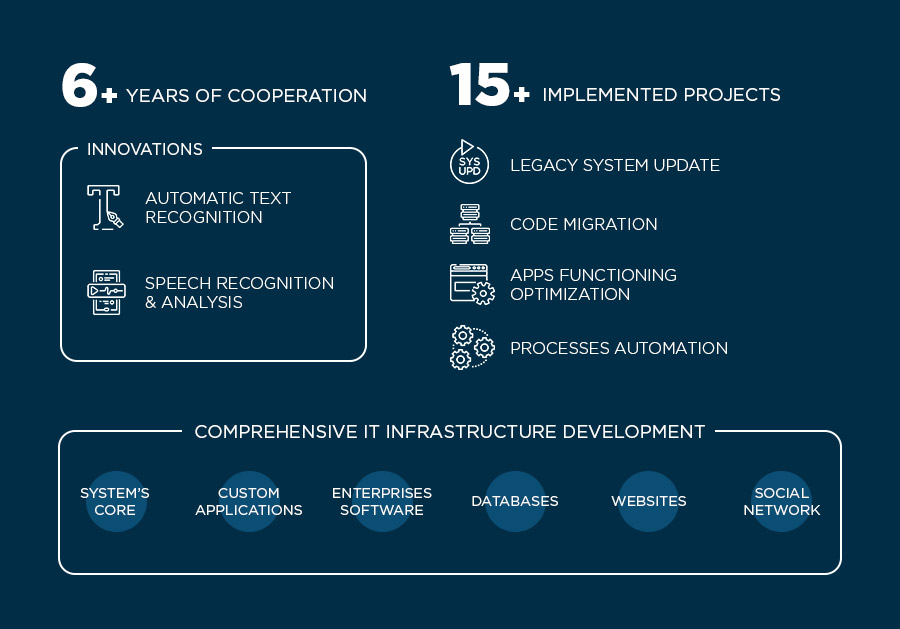 Velvetech developed a utility for marketing and sales automation, which Insureon chose to host on its servers.

Velvetech developed an application form builder with drag-and-drop functionality. Our team projected a modular architecture for the builder. Insureon’s employees can create forms in the builder interface, and there is no need for them to go into the code.

The initial idea of a form builder belongs to Insureon, but Velvetech employees offered a lot of innovative suggestions that became parts of the tool.

The previous email system was transferred to C# with the goal to use Spring.NET.

The new system supports numerous email templates and macros. It can also track opened and ignored emails. Depending on the email type, the system generates documents required by the company’s workflows.

The email system built by our team has rich functionality that can be compared to a proprietary CRM system, but tailored to the needs of a single company, which gives Insureon total control over its functionality.

Velvetech upgraded the system’s core from monolithic to modular so that if one module fails, the rest of the system is not affected. Moreover, it is a lot easier to operate such a system.

That was a year-long, complex task: we had to preserve the system’s logic while rebuilding its architecture and transferring it to a modern tech stack.

Velvetech’s developers suggested several optimizations for new architecture implementation when working on the insurance system upgrade. Many of those ideas found their way into reality.

Velvetech built the text recognition tool by customizing a third-party ready-made solution. That tool successfully processed the client’s documentation in a short period of time.

Our system recognizes and transcribes speech in real time, analyzes it and advices operators on what they need to say to a client.

We had to have a software development partner, largely because we did not have all the capabilities internally. But as we picked that, we had to have somebody that could work at our pace and our speed… in true partnership.

And that is where Velvetech came in. They have been amazing in enhancing our team every step of the way, adding capability. And they really do feel like a part of Insureon.

Modernization of Insureon’s IT infrastructure continues to this day. Insureon pays attention to R&D and implementation of innovative insurance solutions such as Speech Recognition and Call Analytics. We provide Insureon with maintenance services for all delivered products and work on new insurtech projects.

The past years have demonstrated that Velvetech and Insureon can have a productive collaboration. Insureon is an innovative insurance company that quickly generates new ideas and never stands still.

While working with Insureon Velvetech got the opportunity to demonstrate its versatility to tackle a wide array of tasks: from front-end and back-end development to quality assurance and UX. With our staff augmentation options, we were able to help Insureon advance new technology frontiers.

Our team is excited to work on every new project for Insureon. It’s an amazing experience to watch the company take the small business insurance market by storm as we help them on the technology front. Velvetech is looking forward to new tech-related challenges that will help Insureon to establish its leading position.