Apache Corporation is an oil and gas company with over sixty-four years of history, operating on three continents and turning in billions in profits.

The company features three history books on its website — is there a better way to describe a front-runner of the energy industry?

Our engagement with Apache started over ten years ago when the company was looking for a vendor to build a tiny web project. Since then we’ve collaborated on many projects: from the company’s website to mobile apps.

Apache found Velvetech via Google Search when looking for a software vendor to develop a world-clock widget for the website to stress its global presence. Velvetech turned out to be the only vendor with an adequate budget and skills to carry out the task in a couple of days.

That was the beginning of a 10-year story of a successful partnership between Apache Corporation and Velvetech.

While we have successfully worked on many projects for Apache, we’d like to focus on a few exciting opportunities that also mark the main milestones in our partnership.

In 2009, Apache Corporation decided to freshen up its corporate website by adding more content and features to offer visitors a better experience and at the same time simplify its management.

The company used to rely on a proprietary CMS that did not allow for easy customization to align with the planned site updates. On top of that, the CMS lacked 100% support for the company infrastructure. Therefore it was an easy decision for Apache to dump the old CMS altogether and to build a custom solution instead.

Besides much-needed facelift, Velvetech had to tackle several other critical tasks to make Apache’s website more appealing to the target audience. Those tasks included:

Two principal challenges that Velvetech had to face during the project were:

We responded by setting up a tandem of qualified engineers who worked on critical tasks together and by employing our best practices for communication: a single channel for communication, one decision maker on each side, regular sprint reviews, etc.

After rapid expansion in 2010, Apache set its mind on a massive website overhaul, which would include front-end, CMS, and everything in-between.

At the time, Apache had started several projects to position itself as an environment-friendly and socially responsible brand. The company had also acquired new assets thus including new regions in its global network of operations.

The new site was to reflect those changes and provide the target audience with the new ways to interact with the brand. Additionally, Apache would need new tools to automate new content creation. So a massive, all-embracing development push was in order.

One of the things high on the requirements list was a mobile version of the website. Today we browse and shop from phones and tablets like it’s no big deal. Apache decided to address this trend seven years ago.

To serve different audiences with the most relevant content, Apache drastically needed a new CMS add-on. The company was looking for ways to quickly create and publish new microsites and stand-alone sites for projects.

Velvetech updated the CMS accordingly, enabling the company to create new websites from the CMS, based on a template.

Another significant improvement of the publishing process was integration with Dreamweaver. Apache’s editorial staff relied heavily on Dreamweaver to edit site contents, and it was only logical to bring the two pieces together.

The frosting on the cake became an option for scheduling post for autopublishing.

Apache’s website served (and keeps serving) quite an impressive audience: investors, shareholders, media, government, career seekers, etc. All these people needed a way to interact with the brand.

Velvetech helped the company to respond to this call in several ways: 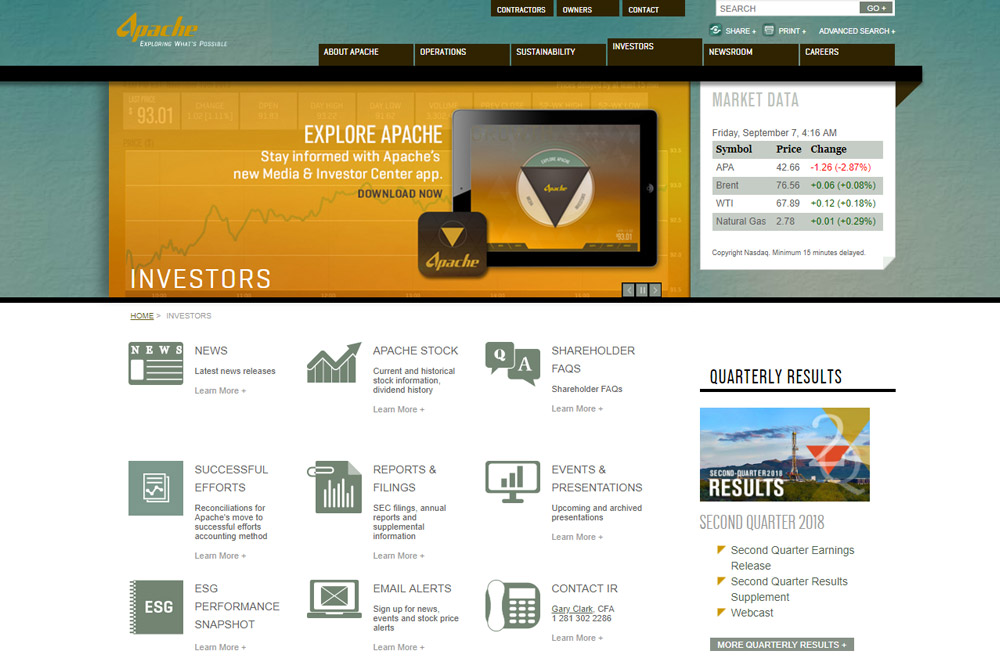 Velvetech collaborated on the project with another team that was responsible for all graphic design and, partially, for the front-end development. So we had to coordinate our efforts closely to proceed with pace.

Our team also had to migrate all data from the website and make sure it gets updated accordingly on the new site.

As we worked on optimizing Apache’s website to render well on mobile devices, we had to find a workaround for displaying content that was not intended for smartphones. Flash videos, for instance, did not play on Apple devices, and some HTML code was complex to render nicely on small screens.

Velvetech provided a way for Apache’s editorial staff to specify in the CMS which parts of content they want to disable in the mobile version of the site. And to handle the Flash issue we built in support for YouTube so that Apache’s staff could upload videos to YouTube right from the CMS.

Just as we were discussing requirements for the big web 2.0 revamp of apachecorp.com, our team prepared a proposal for developing mobile apps to respond to increased mobile traffic that the site had been experiencing. 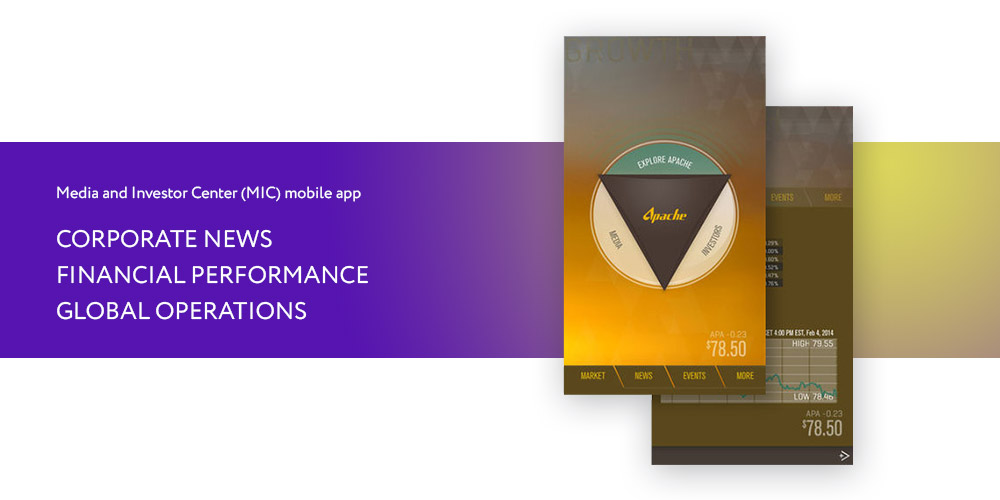 The idea was to provide a more engaging user experience for mobile device users and take advantage of native mobile features like push notifications, etc. And so as soon as the updated website went live, our team jumped on the mobile project.

For Apache, it was vital to provide support for as many mobile platforms as possible. According to Google Analytics, people most often viewed the site on iPhones, iPads, Android smartphones and tablets, and Blackberry phones. It soon became clear that the budget would get outblown if the company decided to develop a native app for each platform.

Velvetech suggested Titanium framework as a way to optimize budget for the development of the company’s mobile apps. After some additional research Apache embraced the idea. The ability to have a shared, practically the same, code base for iOS and Android seemed lucrative enough.

The sole purpose of Apache’s mobile apps was to provide investors and the curious public with the most relevant data. Above all, that meant two things:

To accommodate, Velvetech implemented an offline mode that allows users to browse through all the content that they had accessed at least once when the app was online. To gather data about user in-app behavior, we integrated Google Analytics into the mobile apps.

As for the rest of functionality, Apache’s mobile apps came out in sync with the corporate website’s features, providing access to all the same data but optimized for mobile. The apps also took advantage of the device-specific features, such as integration with native calendar apps and push notifications.

The biggest issue we had to overcome on the project was the fact that Apache kept introducing features and changing the scope. Fortunately, the company’s management embraced the agile approach and agreed to shift the delivery to get more functionality upon the release of the apps.

Some of the features we were adding are:

Velvetech also had to update the CMS to provide the editorial staff with full control over mobile content in the apps.

Apache Corporation got a modern corporate website optimized for mobile viewing and mobile apps. Our development efforts also let Apache lower the budget for website support and maintenance: with a custom CMS, the company could drop a paid service.

The company now has total control over content management on its website and can tweak and improve its CMS as it sees fit. 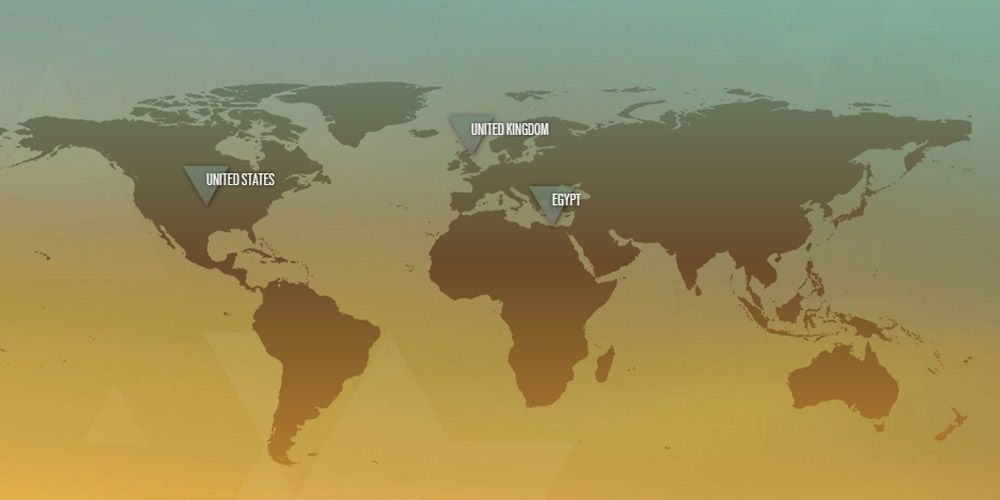 It’s fun to recall: we started with just a clock widget. But it is this attention to details and dedication to client’s success on every project — regardless of its size — that sets Velvetech apart from many other software development companies.

I’ve been working with Velvetech for about twelve years. I hired this firm to create some simple code for me, which grew into website development and then Velvetech developed our first mobile app.

Velvetech is a one-stop shop for everything relating to the web… social media, mobile apps, websites. With their expertise, professionalism, and enthusiasm, Velvetech has grown to be an extension of my department. They’re always two steps ahead of me, which is invaluable. I wouldn’t consider doing a web-related project without Velvetech.

We continue watching the latest trends in mobile and web development that Apache Corporation can benefit from. At present we are discussing several options for another round of large-scale updates for the website and mobile apps.